There aren’t many old-time drive-ins left in the twin cities.  Last year the king of them all, Porkys in St. Paul, was closed for business.  But the Minnetonka drive-in lives on and still open for business during the warmer months.  It still features in-car ordering and car hops to deliver the goods.

Last weekend I found myself driving by the place when it and the streets were deserted.  I got a good glimpse of the checkerboard paint scheme on the driveway that is usually obscured by cars.  I happened to have a camera along so I decided to stop and see if I could get a shot or two of this historical building.

The weather was overcast and gray.  I reviewed my images later and they just didn’t seem to have enough pop to them, but I did love the checkerboard paint as a lead-in to the building itself.  So I experimented with a few different treatments to the shots I liked the best and came away with the two below.  The first uses one of my favorite techniques of converting to B & W and adding back in color to the focus of the image.  The other I think benefited from the addition of a more dramatic sky. 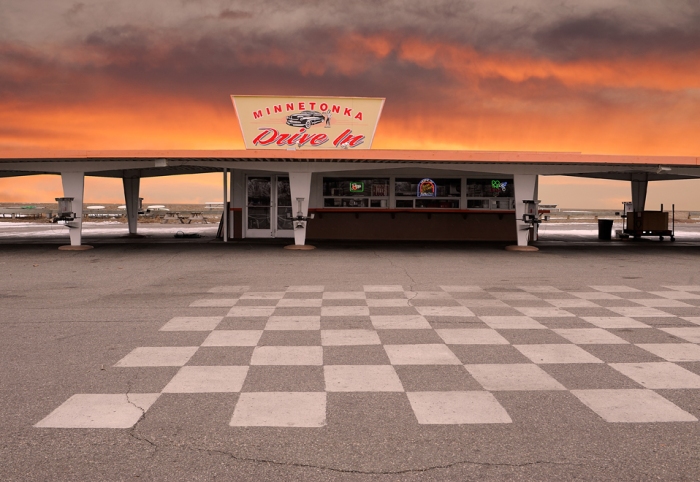 One thought on “The Drive In”