These images were captured in Red Wing on March 20th standing just north of the Amtrak Depot.  It was raining heavily and stopped briefly.  The sky looked ominous and I thought I may be able to get some dramatic cloud effects by doing HDR images.  The image of the station was taken facing the north and the rail yard facing the south in the same location.  Both HDR images were processed with Photomatix and final cleanup was done in Photoshop.
For the Amtrak Depot,  I desaturated the red in the parking structure to give it a more timeless rather than a 1960’s look and to blend in better with the muted tones resulting from the gray sky.   I waited for the man to walk out of the depot to get one shot.  After the HDR processing was complete, I moved  the man from one image to the appropriate position in the combined image. I used Nik Color Efex Pro for the vignetting.

The rail yard is an HDR image toned in Photomatix. Cleanup done in Photoshop and HDR Efex Pro. 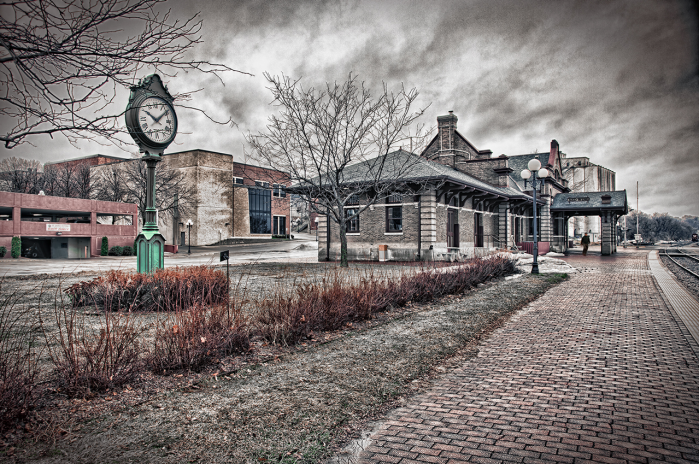