This summer I have been working on taking pictures of people, total strangers that I come across when I’m out shooting.  I talk to them and ask permission to take their picture.  This is something that is well outside my comfort zone, but has been a great experience.  There are others doing this, for example there is a Flickr group called 100 Strangers, it’s a place for posting photos and telling stories about people you just meet while out shooting.  There are several things that make this both difficult and interesting.  Think of it as an Iron Photographer challenge.  You have a subject, the available light and the background is what it is.  You have less that a minute to get the shot.  There is an audience too since your subject expects that being a photographer you will of course come up with something great.  The pressure to work quickly helps to bring out your creativity.  The one thing that has surprised me about this is how friendly and open people can be.  Almost everyone I have approached has been happy to let me take their picture.  Most open up and we wind up having a nice conversation.   So every picture has a story. Below are a few photos and a little story about each one.

This is from the State Fair near the end of the first day of the fair.  I was nervous about approaching cops, so even though I saw something interesting I went on by.  But I kept thinking about the shot I saw.   When we came back through later the cops were still there.  I just went over and asked if they would mind if I “shot them”.   They said sure and seem pleased (I think that shows in the shot); the guy on the right even lifted his sunglasses to show his face better.

This is another one from the fair.  When I stopped to get some beer, the girl on the left noticed my camera and asked about it.  We talked while she was pouring the beers.  Then I asked her if I could take a couple pictures.  The girl on the right was standing nearby and saw what we were doing.  When I got the camera up she moved over and struck a pose with her hand on her hip to get in the picture. 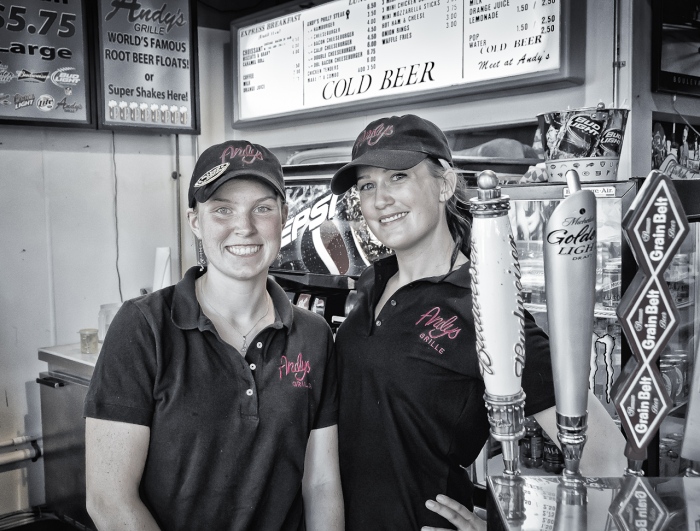 This was shot in Lanesboro, Minnesota.  I saw the shop and wanted to photograph it, but I thought it just needed something to make it work.  So when I walked by later and saw these two sitting out front the shot I wanted was there.   I approached the couple and asked if I they minded if I took some pictures with them sitting there.  They were friendly, but misunderstood what I was asking and got up to leave so I could shoot with them out of the way.  They were a bit uneasy about being in the picture, but nevertheless asked what I wanted them to do.  I told them to relax and enjoy their ice cream.  I shot several pictures.  In the first ones the couple was looking at the camera and sort of posing.  Finally, they relaxed and I got this casual looking shot that captured my idea of a summer afternoon at the ice cream shop.

This is from Heritage Square at the Minnesota State fair.  There is a long row of small stalls all selling little specialty items.  Retro Aprons really stood out to me.  It was bright, sexy and colorful; these three women in their 50’s style dresses and aprons were wonderful.  I walked up and asked if they minded my taking a few pictures.  They were friendly and agreed.  The women on the left and right stepped out of the stall and left the tall girl in the middle alone.  The tall one understood what I was interested in (the women in their outfits) and she was ready to go.  I had to coax the other two back into the picture, and was very pleased with the result once I did.

Service with a Smile

This is from the Kandiyohi County Fair held in Willmar, Minnesota.  I bought a hot dog from this guy with the intent of striking up a conversation and taking his picture.  It turns out he is a bit of a photographer too.  He asked about my equipment and told me about his (read: photography equipment ed.).  When I asked to take his picture he told me that he and his crew had their picture taken as a group at the beginning of the fair, but he had never been photographed on the job serving customers.  He was pleased to cooperate.  I got several good shots and thought this was the  best.

These last two images were taken in Willmar Minnesota while shooting for the groups Main Street Project.  I was nervous to walk into the shop alone.  So I asked John Olson to come with me and he agreed as long as I did all the talking.  Turned out there was nothing to worry about as Denny was a very friendly guy and was happy to let us in to shoot. Some of the customers did not want their picture taken, but this guy with the flat top was a great subject.  It was difficult shooting inside in a tight space with a lot of mirrors.   I shot this in color, but later decided to try BW to give it a more intimate feel that I think tells the story better. 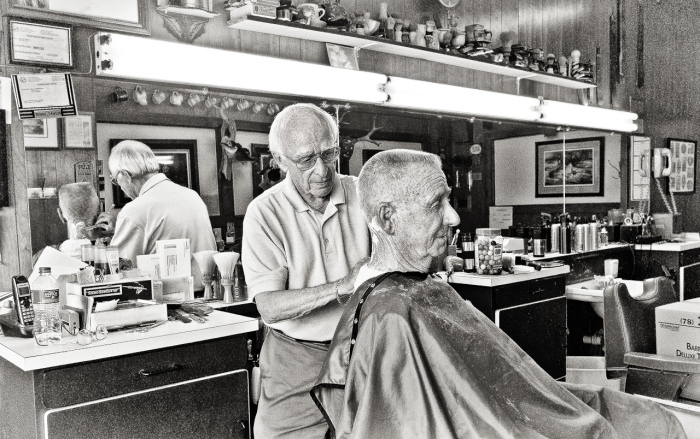