I live right in downtown Minneapolis close to the finish of the Gay Pride parade held there every June.  This year my wife’s employer had a float in the parade and asked me to photograph the participants to send to their corporate headquarters in Chicago.  So I ended up actually being in the parade taking pictures of the float/riders as it went over the parade route.

Before the float made it to the starting line I had a chance to take pix of some of the other participants in it.  There usually are a huge number of colorful people both in the parade and watching it.  The problem is there are so many people who attend, and so much commotion, it is difficult to isolate many of the lively characters in and around the event.  I managed to get a few images of some of the people who caught my eye, but after viewing them in color I decided they probably would work better with a different treatment.  So I converted some of the imagesI liked to black and white, but that didn’t seem to help much.

Finally, I focused on the image I have of the younger boy waiving the rainbow flag and decided I needed to isolate the flag by bringing back its color into that B & W image.  It worked for me, so I used the treatment on other images I thought would benefit from adding some color back into the image to emphasize the main subject.  The images below are some of the images given this treatment. 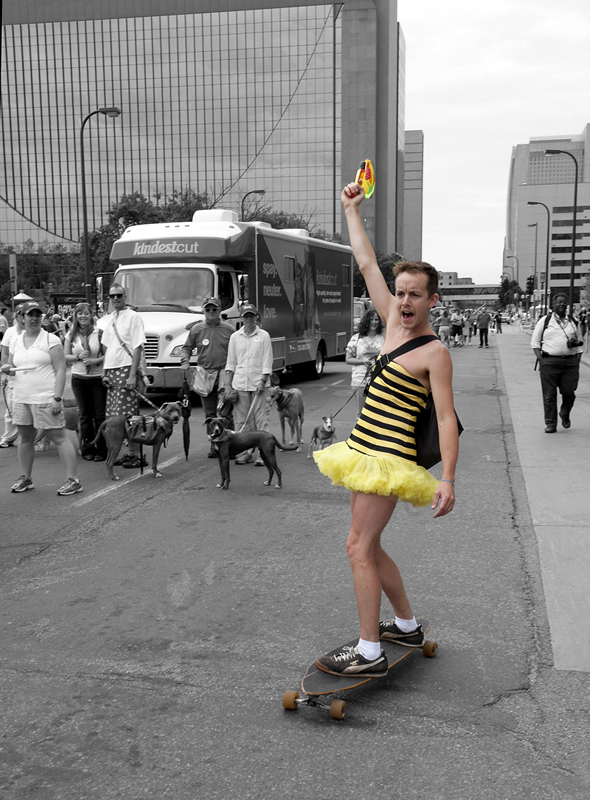