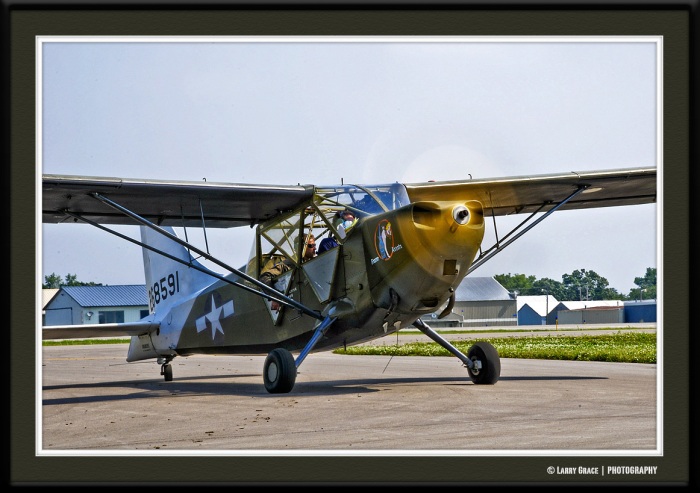 The USA light aircraft L-5 Sentinel began life as the pre-war Stinson Model 105. The model 105 was nicknamed Voyager, built by the Stinson division of Consolidated Vultee. When World War II broke out, the Voyager was redesigned and then entered into service as a liaison aircraft. It also flew in the artillery spotter role and as an air ambulance. The later model L-5s had their fuselages modified to accommodate one stretcher patient.

The L-5 was manufactured between October 1942 and September 1945, during which time a total of over 3,896 of these unarmed, two-seat aircraft were built for the United States armed forces, making it the second most widely used light observation aircraft of the war. Personnel in all service branches commonly referred to it as the “Flying Jeep”.

The L-5 was primarily constructed from steel tubing and plywood covered with doped cotton fabric.  This image was taken at the Eden Prairie Air Expo as it was being guided to a parking space on the ramp. 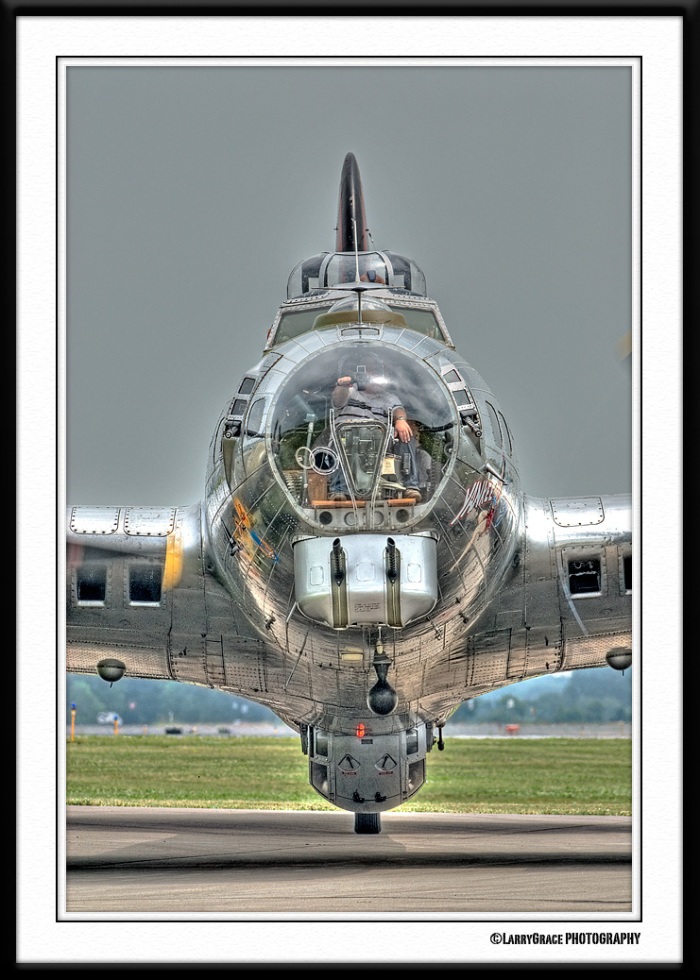 The Boeing B-17 Flying Fortress was a four-engine heavy bomber aircraft developed in the 1930s for the then-United States Army Air Corps (USAAC).  It was primarily employed by the United States Army Air Forces (USAAF) in the daylight precision strategic bombing campaign of World War II against German industrial and military targets. The United States Eighth Air Force based at Thorpe Abbotts airfield in England and the Fifteenth Air Force based in Italy complemented the RAF Bomber Command‘s nighttime area bombing in Operation Pointblank to help secure air superiority over the cities, factories and battlefields of Western Europe in preparation for Operation Overlord.[4] The B-17 also participated to a lesser extent in the War in the Pacific where it conducted raids against Japanese shipping and airfields.

Aero Services Corporation of Philadelphia, Pennsylvania acquired it on August 2, 1965 and sold it to Beigert Brothers of Shickley, Nebraska on October 1, 1965. Aircraft Specialties Incorporated of Mesa, Arizona bought it on March 19, 1966 and flew it as tanker c34 and later tanker #34. It was flown to Hawaii in January 1969 to appear in the movie Tora Tora Tora. Globe Air Incorporated of Mesa, Arizona acquired it along with B-17G-85-DL, N9563Z on February 18, 1981.

It is now named “Yankee Lady” and flies for the Yankee Air Museum at Yspilanti, Michigan

One thought on “Aviation History”

All images and materials copyrighted and property of their respective owners and cannot be used or reproduced without owner's written permission.
%d bloggers like this: